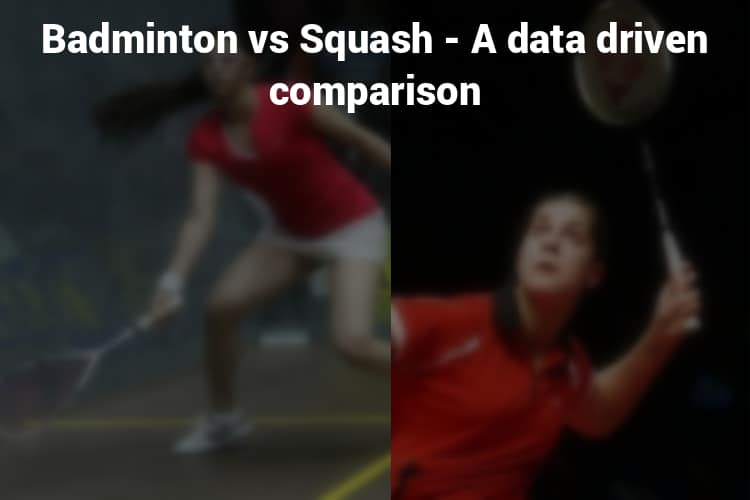 If you have ever asked yourself (or Google) any of these questions or any other one that compares badminton vs squash, you are in the right place. In this post, we are going to compare everything that can be compared between badminton and squash. Curious? Then read on!

Average duration of a rally

Rallies are, on average, shorter in badminton than in squash. Even though I could not find so much information about squash as badminton, it is clear that the trend points in the direction of squash being much longer. The duration of the average rally is shorter in badminton. How much shorter though? According to a study done by the University of Malaysia, the average rally of their tested matches was 4.62 seconds for male players.

Regarding squash, according to a study done by the English Institue of Sport, the average time for a squash rally is a whopping 25.98 seconds. According to a study by the Faculty of Sport, University of Ljubljana shows a different figure, reducing the time to 16.55 seconds. This means that the average duration of a rally in squash is between 2.6 and 5.6 times that of badminton.

Average duration of a match

Also, matches are, on average, shorter in badminton than in squash. According to the data available from the University of Malaysia, the average duration of a badminton match is a bit more than 17 minutes. This is a bit different from a study undertaken by the University of Granada, which increases the average match duration to a bit more than 28 minutes.

This figure is, in any case, very far from that of squash matches. Taking the same study from the English Institute of Sport, the average match duration is 69 minutes. This means that the average duration of a match for squash is between 2.4 and 4 times that of badminton.

If you are currently playing squash and are thinking about giving badminton a try, you can check our badminton match post where you will find all the information required to start a badminton match.

Average duration of effective playing time in a match

The difference holds also true when it comes to effective playing time.

According to the study from the University of Granada, the average effective playing time was a bit more than 9 minutes for badminton.

Even though we could measure the speed of a lot of items, there is one element that dwarfs all others in importance, and that is the speed of the ball or shuttle.

Here badminton takes the lead, being the fastest racket sport on earth.

Now let’s compare the weight of the different equipment used while playing both badminton and squash.

Rackets are one of the most important items in a squash match and in a badminton match, as they are the tool that the players use in order to hit the ball or the shuttle. They are so important that their requirements are heavily regulated. If you want to see all the requirements that the rackets need to fulfill in order to be accepted for play in badminton, have a look at our badminton measurements post.

As far as badminton is concerned, the weight of the rackets usually varies between 2.8 and 3.5 ounces (80 grams – 100 grams). This means that a squash racket is between 1.35 and 2.1 times heavier than a badminton racket.

The shuttlecock and the squash ball are the projectiles that the players have to hit with the aim of making a shot that the other player cannot return. Even though they are both the central part of the sport, they could not be more different between themselves

shuttlecock has a cork base and (usually) a feathered body, whereas the squash ball is made of two pieces of rubber compound, that are glued together to form a hollow sphere. Moreover, the shuttle has an open conical shape whereas the squash ball is spherical. If you are curious about the shuttlecock, in our badminton measurement post we also explain all the requirements that a shuttle needs to fulfill in order to become suitable to be used in a badminton match.

Weight is not the only measurement that matters. Other interesting comparisons between badminton and squash are regarding dimensions such as length or width.

Badminton and squash courts are quite different. In badminton, you have a net that separates the two players or teams, whereas in squash the court is surrounded by four walls and the players share the same space. If you want to know more about the badminton court, be sure to check our badminton court size post, where we explain al the measurements regarding the badminton court.

However, it is worth noting that the area where a badminton player moves is only half of a badminton court, whereas in squash the court is fully used by both players.

As we said before, rackets are heavily regulated, especially when it comes to dimensions. As for squash, the WSF (World Squash Federation) has the following restrictions:

As for badminton, the BWF has the following restrictions:

As far as the projectiles are concerned, the difference in size is quite significant, but mainly due to the different shape, which makes it difficult to compare.

For badminton, an extract is taken from our badminton measurements post:

e feathers shall be fastened firmly with thread or other suitable material.

As for squash, the ball measurements are defined by the World Squash Federation (WSF), with an official diameter of 1.6 inches (40 mm).

As far as squash is concerned, according to the English Institue of Sport, the average shots per rally is 13.

This means that the average point in squash has 2.1 and 2.7 times more strokes per rally than badminton has.

Until now we have compared everything related to the game itself. Now we are going to compare a few statistics more related to people. The first comparison is the number of people that actually practice the two different sports.

According to Pledge Sports, badminton is within the top 10 most popular sports in the world by participation. Are you surprised by that? Did not expect badminton to be there?

Well, badminton is a very important sport in both India and China and, those two being the two most populated countries in the world, they help badminton be present in this ranking. In total, badminton is played by around 220 million people worldwide.

Squash, on the other hand, has fewer players. According to the source you check, the number goes from 15 to 30 million people.

So, bearing in mind these numbers, we could say that there are 7 and 14 times more people that practice badminton than squash.

With such a big difference in followers, you could expect a difference in earnings also, and so there is, but not as high as you would think.

In badminton, according to the Badminton World Federation, the highest earner for 2019 was Kento Momota, which earned $506.900 during the season in prize money.

In squash, reliable data is hard to find. However, one thing is clear, the numbers are lower than for badminton. The highest male earner according to improvesquash.com earned in 2018 a total of $278.000, which is a bit more than half of what Momota earned.

Our final section compares the calories burned in both sports.

What is Metabolic Equivalent of Task (MET)?
A metabolic equivalent (MET) value is a measurement of the energy cost of a specific physical activity for a specific period of time.

A MET of 1 would be roughly equivalent to a person’s energy expenditure from sitting still in a temperature neutral (room temperature) room and not actively digesting food.

So, according to this data (which has been taken from the Compendium of Physical Activities), squash burns more calories per minute exercised than badminton does. If you are curious as to how much you would burn in a certain period of time, you can follow the two links below:

We did a quick example for a person weighting 80 kilos and playing for one hour and the results are as follows:

And with this last comparison, we have arrived at the end of the post. Is there any comparison that you have not found and that you would like to see? Do you have any other comments on the post? Then let me know in the comments below!